The person photographed carrying what appeared to be a firearm near a high school — a sighting that triggered a lockdown of four Fredericton schools this morning — was actually carrying an umbrella, say city police after they located the man.

“This image is of the umbrella that the man was carrying this morning,” the police force said on its Facebook page, after the nearly three-hour lockdown ended Friday.

hi-umbrella
Fredericton police released this photo of an umbrella that was thought to be a firearm being carried by someone near Fredericton High School on Friday. (Fredericton Police Force)

“As you can see, it has significant resemblance to a weapon.”

Police received a report about 9 a.m. AT indicating a teenage boy dressed in dark clothing was carrying a firearm in a gun sock.

The high school typically has a student enrolment of about 1,800. Priestman had a school population of 527 at the start of the current school year.

The lockdowns also affected nearby École Ste-Anne and École des Bâtisseurs in the French school system. No students are at those two schools Friday, but teachers are present.

After the lockdowns ended, Fredericton police released photos of a person they said they would like to speak to about the Friday morning call that led to the lockdowns.

hi-fhs-police
There was a heavy police presence in the vicinity of Fredericton High School after a report of a young male carrying what appeared to be a firearm. (Bridget Yard/CBC)

They eventually made contact with the person carrying the umbrella.

During the incident, police had said they were “taking a measured approach to deal with this situation.”

“We realize that during incidents like these, the public’s worry and concern can be significantly heightened.

“We can assure you that we take these reports very seriously, which is why we have deployed significant resources at this time.”

I read this article and then I decided to google. This is what I found:

Question: Should such umbrellas be banned?

Imagine you see one of these. What would you say? Imagine someone carrying this umbrella gets on the bus, enters a school or a restaurant. 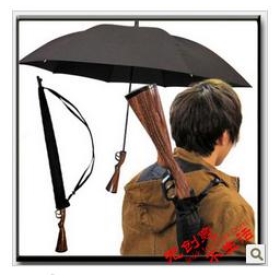 What if a police officer shot someone like this guy in this picture?

His body language is obvious (removing a weapon,ready to use it). Is the police officer expected to “know” it’s an umbrella?!